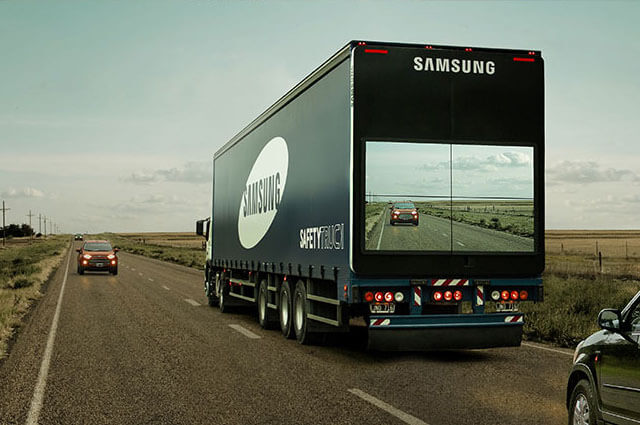 Here at JAM, we Love technology. “Love” with a capital L.

Whether it’s innovation under the hood, in the cab, monitoring the tires, or attached to the trailer or between two trucks – we’re all for it. Engineers generally don’t just build ideas “for fun.” They build ideas for a reason – something like safety, fuel efficiency, lower emissions, or just plain ol’ driver comfort. Some succeed and (usually years later) we see them on the road. Some fail and live on only in the archives of blogs like this one. As a company made up of tech and service geeks we get excited about almost every innovation we see on the interwebs.

In today’s post though, I wanted to step out and pen my own personal opinion on one of these trends. (This is me by the way, in case you didn’t know.)

Today’s post highlights Samsung’s new “Safety Truck” that has been buzzing around the internet like flies around streetlights. If you haven’t heard about it; I’ll give you a quick rundown. Basically the truck utilizes a front facing camera that monitors the lanes in front of the truck and then projects that image, in real time, on the back of the truck. The idea behind it obviously being to lower the crashes and near misses that occur when a 4 wheeler (or any amount of wheel-er) goes to pass a semi  on a two laned road.

Now I like the idea; don’t get me wrong. People are going to pass trucks because… well you know… they’ve just got to get where they are going rightfreakingnow. But for the first time since I’ve started to post on this blog, an idea–this idea–has me a little nervous. Not because of the expense to adopt such technology–heck–most of the tech trends we report on here will only be immediately attainable by a select income level individually and those corporations that are steady adding commas to their bottom lines.

Rather, it makes me nervous for the heightened sense of confidence it will give those  people that find it necessary to scoot in and around traffic.

And okay… maybe I should stop there briefly before I make a sweeping generalization on a public platform.

“They” aren’t all idiots.

I am not an idiot and I’ve been on the expressway with someone going 50 in the fast lane–we’ve all been there–and passed them (usually whilst grumbling under my breath.)

The people I am talking about here are the countless number that take needless risks simply because they’re in a hurry. I’ve been on too many 2 lane highways to count and seen cars cross the double yellow line to pass someone who is simply maintaining the speed limit.

It is the combination of these people and this technology that makes me a little nervous.

Again, let me emphasize: YES. SAFETY IS GOOD.  Samsungs intentions are GOOD. I’m even actually one for cameras monitors on semis in lieu of mirrors. But with mirrors or cameras or magical genies strapped to the side of your vehicle to tell you the surrounding traffic as it happens, there still is a warning that “objects in the mirror are closer than they appear…” and smart people would probably STILL take a quick look to whichever side before just blindly listening to a magic genie.

I don’t know… I could be wrong. I could end up eating my words and this technology could drastically reduce the number of crashes resulting from passing vehicles.

But I need to it put out into the universe that my gut feels a little funny about it.

Slap essentially a big screen TV on the back of a truck that broadcasts the traffic in front of it in “real time”and you are bound to get idio…. ahem… people that get a false sense of confidence that “according to that picture I can totally make it” and then floor it into oncoming traffic.

So while I am totally behind Samsung’s idea and direction, my confidence in those aforementioned bad drivers is… well… lacking.