The Game To Play on the Road Today | Semi Truck Repair

Lochness on the Way to GBATS!

The hunt for Pink and Braless October

What Happens When Bad Things Happen to Good People

Picking a title for this post was seriously tough, ya’ll.

I mean, c’mon, who doesn’t love a real life Where’s Waldo event, am I right? I can’t even smile big enough right now. So naturally, being the creative genius that I am (and if you actually know me, just pretend to agree with that and roll on :)) I had plenty of comparative statements to use for this piece annnnnnd well like potato chips, I couldn’t pick just one. (Actually truth be told I hate potato chips but I’m just really hitting the simile bottle hard this morning.)

Anyway, there’s quite the buzz building on the internet surrounding a favorite trucking couple of ours and we thought we’d let you in on the fun. You have probably heard of the supercool trucking couple George and Wendy. I’ve mentioned them here on the blog several times, they’ve got a massive community of great trucking people over on their Facebook page, and they’ve got hearts as big as the state of Montana and just as beautiful. (Here’s this for funsies just in case you need to be reminded of how truly beautiful Montana is.) George Parker is an Owner-Operator who drives his truck commonly known to the public as “The Precious;” and his lovely wife Wendy is a featured Contributor at Overdrive Magazine and just a dang great scribe in her own write. (Lord help me and my love of the English language today.)

Long story short, they got caught by  some bad gumbo recently – of which the crop-dust  still hasn’t settled. (If you’ve had bad gumbo in your life, you know exactly of what I speak. There’s really nothing worse – the chicken was recalled for salmonella without the chefs knowledge, the sausage is a week+ over its sell by date, and you’re pretty sure that the shrimp were directly imported from the beautiful shores of Fukushima, Japan. It changes your life for a while and not for the better.) I do generally believe however that when bad things happen to good people, God kicks the karma button into action. The good people are mended and become good-er people with super good things happening to them and what’s done in the dark always comes to light; because truly, as we all know, eventually the nausea will begin to subside, the chafe in our personal Australian Outback lessens, and we once again have enough confidence to travel to places without a bathroom directly nearby.

It seems with George and Wendy’s recent gumbo-tastrophe, things are finally coming around. They’ve been reunited with the Precious, their beloved Freightliner, and blessed with a brand spanking new paint job to introduce at GBATS. Everyone that knows them or interacts on their page is DYING to see the new makeup, but their lips are zipped tight.

That’s where the modern day Where’s Waldo idea came in, thanks to a particularly special person I know – Jamie Hagen. (He may/may not have been mentioned on this blog before too ;)) Anyway, each day, we know that truck drivers are literally moving America’s economy. So his idea, since they won’t spill the beans about the paint work, is to get all of our eyes out on the road to play a rousing game of “Where’s George and Wendy.” No, we don’t have any clues on the paint job,  but I’m certain JAM has both fleets and drivers out there today; and I’m sure a lot of ya’ll do too. So in the spirit of finding the Lochness, or Bigfoot, or whatever, let’s see if we can spot their truck on the way to Joplin! Not only are we going to share their route with ya, but we’re gonna dedicate an especially appropriate song to George and Wendy themselves, for you to play while you’re on the hunt. Good luck! 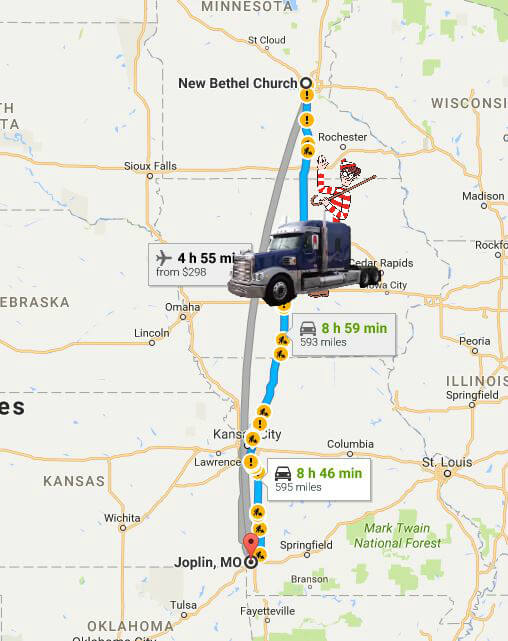