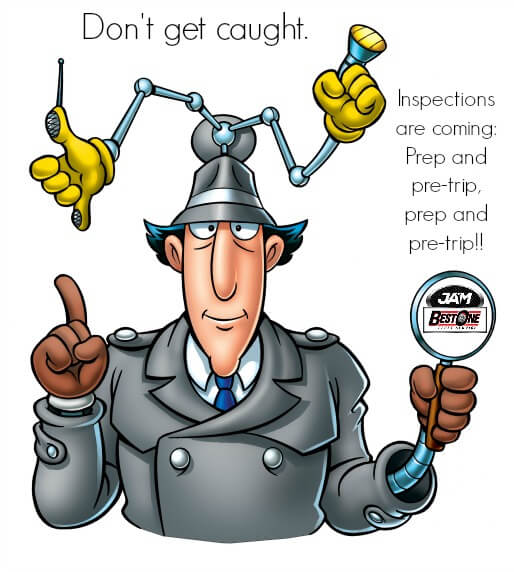 I’ve done regular countdowns in the past, but this week I felt a little bit frisky, and thought to myself – “Heck, Hillary. What’s the first thing you think of when you hear final countdown? That’s right, a TV series long ended: Arrested Development.”

So let’s all enjoy this 13 second clip before we delve into the final discussion piece on a topic not nearly as entertaining as Will Arnett’s character: yet another week of DOT inspections.

Yes, there it is. The final week before Operation Safe Driver begins. From the 16th through the 22nd, DOT officers as well as local law enforcement will be cracking down on both CMVs as well as 4 wheeled vehicles alike. For the sake of this blog though, and we will only be focusing on our commercial counterparts.

[Aside: We focus on this portion, very obviously, because it is these fleets that our business serves. It bears mentioning though that to spend any more than a paragraph on “making 4 wheeled drivers safe” (notice the quotations here please) would be a waste of the muscle energy of my hands to type any of it out.  It is my personal belief that the 4 wheeled problem can’t be fixed unless law enforcement looks as closely, fines as considerably, and enforces as hard, the same type of regulations it does to CMV’s. Which, as is common knowledge, will never happen, because very simply: Money. The average citizen can’t pay out fines as considerable as the ones that are imposed on Owner/Operators and fleets alike. Additionally, even if they were, the likelihood of them actually collecting would be slim to none.]

So, since we have found ourselves in another month with a vowel in its name, I urge you my drivers, fleets, and friends alike to begin the preparation for inspections if you haven’t already. You should be PM-ing your fleet regularly, to keep the number of inspection related violations you receive to a bare minimum. Again, we present to you this list to pass onto your maintenance managers to prepare for the week ahead.

Let’s get on with it then.

We’re down to the last 3 non-inspection related violations in the top 5 enforced by the DOT during Operation Safe Driver. The first two spoke on driving while operating a handheld device and seatbelt

Just to keep our communications 100% honest with you,  it should be known that if you get hit for size and weight – we’re probably going to have a chuckle at your expense.

Not controlling the things in your fleet that you can actually control is just irresponsible; and we know you’re better than that.

The other two violations are certainly more driver-centric, but not completely unavoidable. The core of addressing this problem at the driver level is in training and best practices. Drivers that are well trained and are regularly encouraged to take their time en route, are less likely to speed, run red lights, blow through stop signs, etc. There isn’t too much more we can say on the topic. Remove the fear of being late to deliveries or pick ups, and increase the importance of safe driving and the number of violations you’ll see from the upcoming week will decrease. And, suffice it to say, you won’t get as many inspections if your drivers aren’t already under the microscope.